The common language runtime manages memory, thread execution, code execution, code safety verification, compilation, and other system services. These features are intrinsic to the managed code that runs on the common language runtime.
With regards to security, managed components are awarded varying degrees of trust, depending on a number of factors that include their origin (such as the Internet, enterprise network, or local computer). This means that a managed component might or might not be able to perform file-access operations, registry-access operations, or other sensitive functions, even if it is being used in the same active application.
The runtime enforces code access security. For example, users can trust that an executable embedded in a Web page can play an animation on screen or sing a song, but cannot access their personal data, file system, or network. The security features of the runtime thus enable legitimate Internet-deployed software to be exceptionally feature rich.
The runtime also enforces code robustness by implementing a strict type-and-code-verification infrastructure called the common type system (CTS). The CTS ensures that all managed code is self-describing. The various Microsoft and third-party language compilers generate managed code that conforms to the CTS. This means that managed code can consume other managed types and instances, while strictly enforcing type fidelity and type safety.
In addition, the managed environment of the runtime eliminates many common software issues. For example, the runtime automatically handles object layout and manages references to objects, releasing them when they are no longer being used. This automatic memory management resolves the two most common application errors, memory leaks and invalid memory references.
The runtime also accelerates developer productivity. For example, programmers can write applications in their development language of choice, yet take full advantage of the runtime, the class library, and components written in other languages by other developers. Any compiler vendor who chooses to target the runtime can do so. Language compilers that target the .NET Framework make the features of the .NET Framework available to existing code written in that language, greatly easing the migration process for existing applications.
While the runtime is designed for the software of the future, it also supports software of today and yesterday. Interoperability between managed and unmanaged code enables developers to continue to use necessary COM components and DLLs.
The runtime is designed to enhance performance. Although the common language runtime provides many standard runtime services, managed code is never interpreted. A feature called just-in-time (JIT) compiling enables all managed code to run in the native machine language of the system on which it is executing. Meanwhile, the memory manager removes the possibilities of fragmented memory and increases memory locality-of-reference to further increase performance.
the runtime can be hosted by high-performance, server-side applications, such as Microsoft® SQL Server™ and Internet Information Services (IIS). This infrastructure enables you to use managed code to write your business logic, while still enjoying the superior performance of the industry's best enterprise servers that support runtime hosting. 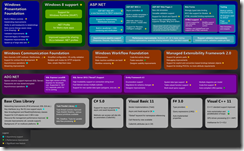 The following features and improvements were added to the common language runtime and to .NET Framework classes:

In the .NET Framework 4.5, new asynchronous features were added to the C# and Visual Basic languages. These features add a task-based model for performing asynchronous operations. To use this new model, use the asynchronous methods in the I/O classes. See Asynchronous File I/O.

The .NET Framework 4.5 provides several new features and improvements for parallel computing. These include improved performance, increased control, improved support for asynchronous programming, a new dataflow library, and improved support for parallel debugging and performance analysis. See the entry What’s New for Parallelism in .NET 4.5 in the Parallel Programming with .NET blog.

Several new features have been added to Windows Workflow Foundation (WF) in the .NET Framework 4.5. These new features include:

Posted by Divyesh Lappawala at 09:30

Email ThisBlogThis!Share to TwitterShare to FacebookShare to Pinterest
Labels: .NET

My Other Blogs and Links